When Men in Black Attack
The Strange Case of Albert K. Bender

In the year 1984, many Americans began to fear that the “surveillance state” predicted by George Orwell might be coming to pass. As a result, legendary writer and ufologist Gray Barker decided to revisit – and hopefully encapsulate – the strange case of Albert K. Bender, who was famously “hushed up” by three Men in Black in 1953 – despite heading up the largest and most successful civilian UFO organization in the world.

Barker had discovered that the three MIB were under the employ of a race of “bisexual” space people from the planet “Kazik,” who were harvesting Earth’s seawater from an underground base near the South Pole. These alien humanoids had gained control of Bender and spirited him off to Kazik, where he was forced to submit to three sexy, shapeshifting space “women.” 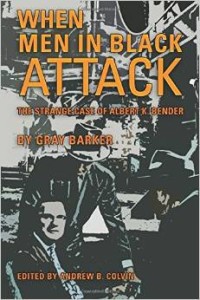 Drawing from articles in Saucer News and his three previous books on Bender and the Men in Black (“They Knew Too Much About Flying Saucers,” “Bender Mystery Confirmed,” and “Men in Black: The Secret Terror Among Us”), Barker weaves a fantastic, unique, and memorable tale – one that came to influence several generations of saucer buffs and sci-fi enthusiasts, and inspired themes in popular television shows such as The Jetsons, X-Files, and Futurama.

This special 2015 edition of “When Men in Black Attack: The Strange Case of Albert K. Bender” features an introduction from Jim Moseley, correspondence from Saucerian readers, previously unpublished transcripts of rare audiotapes (such as Bender’s one and only public lecture), and fascinating contributions from a variety of Barker cohorts, including author William S. Burroughs.

“Complex, funny, and intelligent. Be very careful…” -John A. Keel

“Without Gray, there would be no Men in Black mythos…” -Nick Redfern