The Crypts of Eden
The Eden Series

Audio Sample: Crypts of Eden – Prologue
In southeast Turkey where the heads of the four main rivers once met, a magnificent temple created 14,000 years ago is discovered beneath the desert floor. Believed to have been created by lost technology, it is quickly determined by a team of archeologists to be the centerpiece of Eden, a once illustrious civilization and the cradle of mankind.

But what if Eden is not the Paradise texts make it out to be? What if it held dark secrets and unholy terrors instead? As Senior Archeologist Alyssa Moore and her team of experts discover the truth of man’s beginning, she realizes that the secrets of man’s true origins lie within the sacred tombs inside the temple. But the journey for the truth is not without its dangers or pitfalls . . . 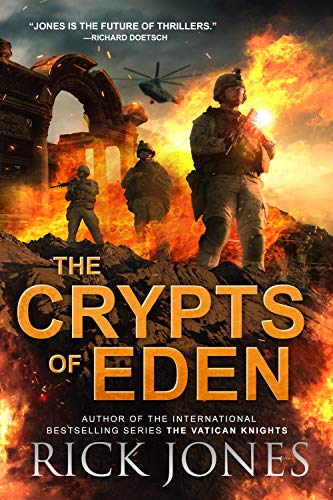 Something walks the warrens within.

“Rick Jones has penned a hair-raising thriller with a twist, and just the brand of action-packed, non-stop writing I enjoy best. He has taken an awesome story, added a couple of emotionally-charged, result-oriented protagonists, a few really bad guys, and topped the whole thing off with a large quantity of whatever is lurking in the dark temple, brutally and savagely killing off the cast of characters.

“I, for one, can’t wait to read more from him in the future. Kudos and four and a half spiders for The Crypts of Eden.” –WebbWeaver