Mike Walton had experienced terrorism from every angle. As a covert field operations officer, he thought he’d seen it all. But that was before terrorism struck him directly at home. Suffering devastating physical injury and unthinkable personal loss, Mike had one of two choices: give up or fight back. And giving up wasn’t in his makeup.

Mike and his wife Lisa – a medical doctor and fellow counter-terrorism expert – are recruited by the International Market Stabilization Institute, a privately funded organization operating outside official channels to protect North America’s financial 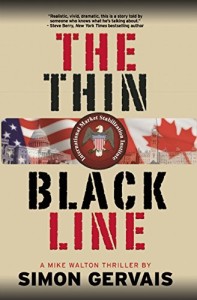 interests. The strikes that destroyed Mike and Lisa’s household – the work of Sheik Al-Assad – are bringing the Western economy to its knees. And they are only the beginning. If the Sheik succeeds, the world will change forever, and the next attack is just around the corner. Mike and Lisa must lead a hastily assembled team to Europe to stop the madness before time runs out.

Rippling with tension, raging with action, and replete with the kinds of details only a true counter-terrorism insider can provide, The Thin Black Line is a nonstop thriller of the first order. It announces an unforgettable new team of characters and a distinctive new voice to the thriller world.

“Realistic, vivid, dramatic, this is a story told by someone who knows what he’s talking about. I offer a bow to this exciting debut and to the newest member of the thriller-writing community. Make a note: in the years ahead Simon Gervais is a name you’ll be seeing on many more book covers.”
– Steve Berry, New York Times bestselling author

“When Simon Gervais writes about the world of high-stakes global security, he knows what he’s talking about. His world-class security expertise shines through in The Thin Black Line, a high-speed, break-neck, turbo-charged thriller that takes readers behind the scenes of the war on terrorism.”
– David Morrell, New York Times bestselling author of The Protector

“The Thin Black Line is a refreshingly smart and blisteringly original tale that’s equal parts financial thriller and cat-and-mouse game with the survival of the United States economy hanging in the balance. Simon Gervais puts his own law enforcement background to solid use in hitting a home run his first time at the plate. A major debut that places him on the level of Nelson DeMille and Brad Thor.”
– Jon Land, USA Today bestselling author of Strong Darkness

“Chilling, compelling, and cutting edge. Global security expert Simon Gervais gives us a husband-and-wife counter-terrorist team that must fight inner and outer demons – and find a way to survive both.”
– Barry Lancet, author of Japantown

“Drawing from his military and tactical training, Gervais offers up a crisp, taut thriller that action fans can really sink their teeth into.”
– Steven James, national bestselling author of Checkmate

“The Thin Black Line is a heart-pounding read! Simon Gervais weaves bona-fide tradecraft into a high-octane story that never lets up. This is one thriller you don’t want to miss!”
– James R. Hannibal, author of the Nick Baron black ops thrillers